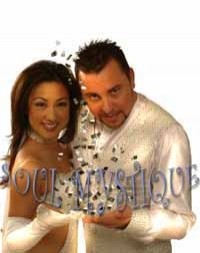 Breathtaking is the word of Australian Entertainers Gavin Skinner & Lydia Lim. Featuring a world-class background since 1996 in Championship DanceSport, Gavin & Lydia exploded onto the American theatre scene in 2000. A passion for creativity led them to Paris in 2004, where they developed what is known today as Soul Mystique…’the world’s most unique magical dance act’.

Presenting the ancient Russian Art of ‘Quick Change’ coupled with show stopping DanceSport, they have captivated and flabbergasted audiences all over the globe from Australia, Asia, USA, UK, to Europe.

Soul Mystique made their Australian TV debut in 2006 at the live & nationally televised ‘NRA Australian Fashion Design Awards’. They were loved and applauded by Australian audiences on Simon Cowell’s international hit reality TV show ‘Australia’s Got Talent’, winning episode 5, and being the most talked about Grand Finalists in the season. We saw them again on the 2012 season of AGT.

Named as the ‘Jewel and Crown of Australia’s DanceSport’, Soul Mystique dazzled audiences once again as the opening act on Channel 7’s broadcast of the ‘2007 Australian DanceSport Championships’. Quoted as ‘Absolutely Fabulous!’ – Soul Mystique never fails to mystify, amaze, and entertain their audiences wherever they go.