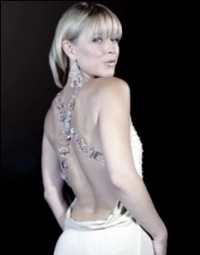 One of Australia’s most impressive female cabaret stars, Nikki Bennett has been one of the Australian Entertainment Industries most versatile performers for almost 25 years now.

A major win in the Australian Singing Competition back in the late 80’s kick-started her international career and saw her travelling the world with her own show before the age of 20.

A signing to Melodian Records then lead to a recording career in London, and on her return to Australia she signed on as Susan in the 91 – 92 Australian production of HAIR.

During this time she began what would become a ten year stint of regular appearances on every national television variety show in Australia, (shows including Tonight Live, Hey Hey it’s Saturday, In Melbourne Tonight, The Midday Show, Good Morning Australia, Saturday at Ricks and many more and in 1997 she was selected by SOCOG to represent Sydney to international delegates with the song “Welcome to My Sydney".

In 2000 she starred in the lead role of Shirley Barrett’s brilliant black comedy feature film “Walk the Talk “ which released internationally in 2001 and with her international profile significantly increased by this release , her International Corporate Entertainment engagements skyrocketed.

Nikki has since has performed at Gala events in 43 countries, including the Queens Golden Jubilee celebrations at the Soccer World Cup in Seoul.

She has been the guest performer at one of Russell Crowe's famous celebrity studded New Years Eve parties, and in 2008 she took some time out from her live performances to film the role of Emily Rogan in 19 episode of the BBC TV series Out Of The Blue, which aired in Britain, Europe, Australia and New Zealand the following year.

She has appeared on almost every national Australian television variety show and became a regular guest on Midday, Tonight Live and Good Morning Australia. This is an entertainer you simply cannot overlook for your next event.

Nikki works alone or with the beautiful J–Foxx dancers and has 10 themed shows to choose from. Including James Bond, Hollywood, Chicago, Halloween, Moulin Rouge, Grease, The Beautiful White Xmas Show and more, every show is glamorous, wonderfully entertaining, sensationally choreographed, stunningly costumed, fabulously orchestrated and guaranteed to have your guests begging for more at the end of an evening they will never forget.

Wow! What an amazing entertainer!! I cannot stress how fabulous Nikki's performance was. Her entire show was superb!