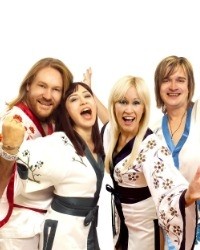 Bjorn Again is the World’s Number One ABBA show, having now performed over 6000 concerts in over 100 countries worldwide. Bjorn Again has sold out concerts in India, China, South America, Australia, New Zealand, Scandinavia, and all over Europe, Asia, USA and Canada. Bjorn Again is regarded as the most successful tribute band of all time and is the only ABBA show openly endorsed by Benny and Bjorn of ABBA.

Adored by its legion of fans, and praised by the media and celebrities worldwide, Bjorn Again have played at all the major concert venues in the world including The Sydney Opera House, The Royal Albert Hall and Wembley Stadium; at all the major rock festivals such as Reading, T in the Park and Glastonbury; and performed private shows for Bill Gates, Rowan Atkinson and Russell Crowe. The band's fans include Dave Grohl, Tom Jones, U2, Metallica and Robert Plant/Led Zeppelin. The band also played an integral part in launching the film 'Muriel's Wedding' at its World Premiere at The Cannes Film Festival in 1994.

Bjorn Again's super high quality re-creation of ABBA's timeless hits, combined with all the glitzy 70s stage costumes, Swenglish banter and hilarious stage antics, creates the ultimate live show which has been described as 'pure joy', 'the ultimate escape' and 'the most fun you can have wearing platform shoes and flares'. The energy generated by audiences at Bjorn Again concerts has to be seen to be believed.

Bjorn Again are the only ABBA tribute band endorsed by ABBA.