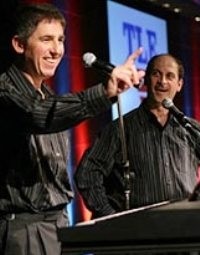 Roast the boss, toast the team… celebrate your success! Brief them on your company, the 'big boss' or the whole team and they'll dish up an original revue that puts them all in the spotlight! It's music, it's comedy, it's satire… all set to familiar tunes. They'll even create a corporate anthem to get everyone singing along.

A Comic Roast is a 30-minute tailor-made musical revue that satirises your team, while celebrating them in song! Comic Roasts create a show of song and ‘shtick’ that roasts your boss and toasts your team, all set to familiar tunes. And because it starts with a thorough personal briefing, the comedy always hits the right note!

Here’s how it works at the event:
Imagine you're at a conference dinner, company celebration, client function, retirement 'send-off' or other special event. Everyone is pleasantly relaxed… but with no idea of what's to come. The MC rises to the platform to introduce the guest presenters - two "top investigators" from the industry regulatory body! Eyebrows raise.

It seems the pair have been going over the organisation with a fine tooth comb, trawling through HR records, scrutinizing fringe benefits and enjoying full access to staff e-mails. "Please give them your full attention." There are looks of concern all around!

The pair accept the polite, if nervous, applause and announce they're about to release their findings. Then they explain they don't go in for the usual audio-video props and toys - 'Death by PowerPoint'.

With a flourish, the pair launch into their musical-satirical routine, David at the piano, Geoff at the microphone. As the laughter flows, the organisation is parodied and pilloried, the boss is gently barbecued (medium rare... just pink!) and staff are celebrated in song.

Familiar 'issues' are set to well-known tunes, the team's successes and slip-ups immortalised in popular song. And the spooky thing is: it seems like these guys really do know your organisation inside out!

And when it's time for the big sing-along finale, the audience doesn't need a second invitation to join in! Hands on heart - with lyric sheets in hand - the whole room sings along loudly and proudly to their own new 'anthem'- Nothing could be more morale-boosting or team-building. Or more fun.

This is the unique appeal of a Comic Roast!

Your roast hosts are experienced performers and musicians who have roasted, toasted and celebrated clients in song at major theatre venues, hotels and function centres all over Australia... and internationally. Well known to stage, TV and radio audiences, they have hosted Theatresports®, recorded for broadcast and between them produced and presented all kinds of shows.

GEOFF is well-known to Sydney theatre, music, TV and radio audiences and is the force behind Corporate Theatresports®, Celebrity Theatresports and other high profile impro-comedy events. As an actor, his stage credits include lead roles in plays, operas and musicals from Belvoir St Theatre and the Seymour Centre to the Sydney Town Hall and the Opera House. Long time poetry reader with the Renaissance Players early music group, his voice appears on more than a dozen CD releases and he is a popular speaker at conferences and comedy debates. He holds a BA in Music and an MA (Hons) in Australian Drama from Sydney University.

Geoff is also a nationally known writer, radio presenter and TV reporter. Former "Voice of CHOICE" (Magazine) ABC-TV Investigators, Channel 7 and Channel 9 Today Show reporter as well as Sunday Telegraph columnist, he's made thousands of TV and radio appearances as consumer advocate and talk-back host. Geoff is also author of the entertaining best-seller The Confident Consumer and a respected publicist in the Sydney arts world.

DAVID is an accomplished musician and comedy writer. He has sung with the Australian Opera Chorus, the Sydney Philharmonia Choir, Bel a Cappella and Coro Innominata. He has starred as musical improvisor in the long-running Belvoir Street Theatre hit Theatresports® and Scared Scriptless at the Harold Park Hotel. As a keyboard player he has appeared on Burke's Backyard and other TV programs.
With Geoff, David has written, directed and performed cabaret, revues and "roasts" at theatrical and corporate venues around Australia. He achieved AMusA in piano and holds a BSc from Sydney University.

Wow, guys, what a performance. The amount of knowledge you displayed about our industry was awesome! Our delegates felt we must have been feeding you for months. We had delegates and speakers from around the world and without exception they said they had seen nothing as good as you at any Insurance Industry function in any country in the world - and they had been to most. It is to your credit that you are able to please so many people with what appears to be consummate ease. Thanks for doing such a wonderful job. The feedback from delegates was unanimously enthusiastic. Take this as a booking for the conference next year.

ANZ Institute Of Insurance And Finance