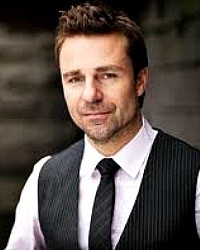 Matt Hetherington is being tipped as the next big thing to come out of Australia. His extraordinary voice has earned him exceptional reviews from his live band appearances and his live theatre performances have placed him in high demand both in his homeland of Australia and overseas. He has spent the last 3 or 4 years traveling to the States to break into the American market.

Early 2007 Matt was asked to create the role of “Oscar” for the July 2007 season of “Sweet Charity” at Melbourne’s State Theatre. In 2006 Matt starred in “The Last 5 Years” and on the back of his performance was asked to sing the National Anthem at the 2006 Cox Plate.

In August 2004 Matt received the prestigious Helpmann Award for Best Lead Actor in a Musical for his performance as the star in the critically acclaimed “The Full Monty”. In August 2003 Matt played Lieutenant Joe Cable in the Rogers & Hammerstein classic “South Pacific” to a sold out season and with great reviews at Melbourne’s State Theatre.

In 2002 Matt appeared as “Berger” the Hippy Tribe leader in the 60’s rock musical “Hair”. His performance earned him a Green Room Award nomination for Best Actor in a Musical. In April 2003 Matt again starred as Berger this time in the Australian Tour of “Hair” directed by Aussie icon and 2000 Olympic Games Opening Ceremony Creative Director, David Atkins and he received a MO Award nomination for this performance.

Matt is well known to many people from his many years of live band work with his band “Matt Hetherington & Beyond Belief”.

His television credits include: “Stingers”, “Marshall Law” and “Sea Change”. Matt has worked extensively as a band singer and as a guest artist has appeared on: GMA with Bert Newton, Hey Hey It’s Saturday, Denise, IMT, Mornings with Kerri-Anne and In Melbourne Today with Ernie Sigley. For the last couple of years his band: “Matt Hetherington & Beyond Belief” has been widely regarded as the best corporate act in the country. As a guest vocalist with the “Peter Sullivan Big Band”, Matt was requested to perform for the Prime Minister at the opening of the Olympic Swimming Centre in Sydney.