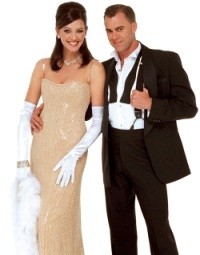 Music of The Night

Original stars of the Premier Australian Production of Andrew Lloyd Webber's, The Phantom of the Opera, Dale Burridge and Danielle Everett will take you on a journey into The Music of the Night!

From Puccini to Lloyd Webber, soaring vocals, stunning gowns and spectacular spine tingling moments combine in this audience interactive corporate concert that will leave the audience begging for more!

Dale and Danielle are also available to perform solo shows to include classic operas to stage show classics, from 15 minutes to 45. Their shows can be tailored to provide your guests with an evening of entertainment that they won't soon forget!

Dale Burridge is one of Australia's most successful concert and corporate entertainers. Having starred in numerous musicals, concerts and corporate events all over the world. First treading the boards professionally back in the 1980's as 'Rolf' in the renowned West End Production of 'The Sound of Music', Dale's theatrical career has had many highlights including being cast by Hal Prince to play the romantic lead 'Raoul', in the Premier Australian production of 'Phantom of the Opera' with Anthony Warlow and Marina Prior, performing at the famous Tropicana Night Club in Havana, performing his highly acclaimed one man show 'Class Act' for the Sydney 2000 Olympics and being a guest soloist for most of Australia's leading Symphony Orchestras.

Danielle Everett has wowed audiences around the world and across Australia with her operatically trained voice, sensational dancing ability and stunningly beautiful looks. Whether performing the aria Queen of the Night from Mozart's Magic Flute or performing musical theatre numbers such as Le Jazz Hot from Victor Victoria, Danielle will leave you and your VIP guests either mesmerized with her Soprano octaves or have them dancing in the aisles to some of the world's favourite show tunes!