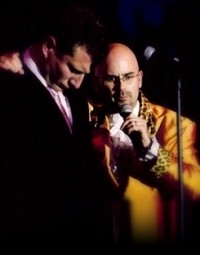 A famous entertainer from the Czech Republic is introduced, having flown directly from sell out performances at the Acropolis and the Kremlin palace. He dazzles the crowd with his opening number and loud suit, singing a knock out song from 70’s. Is he just a singer? NO. He is much more. He moves through the audience and chooses three ‘volunteers’. He announces their fate…… They are about to be hypnotised. Gasp!

Unbeknownst to the audience, two of the three volunteers are in actual fact part of the act and have been seated guests throughout the evening. Anxious moments pass as the three are tested as to whom will be the most receptive to the hypnosis, and you guessed it we are left with our two ‘undercover’ guests who are by now in a deep trance.

What follows is an incredulous display of uninhibited talent from two unassuming guests who are now under the spell of the Hypnotist. From ballroom dancer to Rock Star, meet an operatic tenor, be treated to a ‘Pop’ Medley featuring all your favourite hits from Tom Jones to Elvis, Bee Gees to Abba, culminating with an appearance of The Three Tenors. The show comes to a dramatic climax as the audience realise they have just been had by ‘HypnoTWIST’.