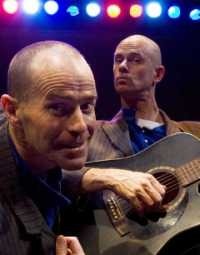 Tony Williams and Dennis Clare first met in Tasmania whilst Tony was touring with a rock band. Twenty-five years later, Tony and Dennis are working together doing what they love most …….music, mime and a lot of mayhem!

They share a similar, warped sense of humour which is evident in their performing style. Their professionalism comes after years of experience of working together. Both are talented performers in their own right. Tony is a seasoned singer and songwriter with many credits to his name and Dennis has travelled the world performing at major festivals.

Fifteen years ago Tony and Dennis formed their business, Water Closet Productions. They have written and performed several of their productions throughout Australia and Internationally on TV and in theatres, schools, at festivals and special & corporate events….such as….. Gulp, Vegies, Mimorama, A Slinky Xmas, Mates. LOL (Laugh Out Loud), H.A.P.P.Y, to name a few. One of their signature pieces is the silver slinkies ( large air conditioning tubes), an apparatus Dennis has been working with since the late eighties, and first brought into performance for the ‘Surrealist’ exhibition at the Art Gallery of NSW where he still performs on a regular basis. The Slinky Outro performance also reached the wider audience when Carpe Idiotus performed on Australia's Got Talent.

They have emerged as a unique and talented performing act with a combination of performing styles not experienced before.