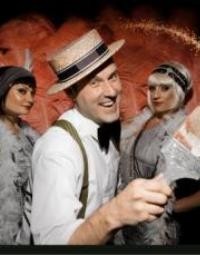 Gavin Bell has been a corporate entertainer for 21 years.  This much in-demand entertainer is engaged not only for his unparalleled artistic talents but for his natural charisma and ability to mix seamlessly with all audiences. Having started off in the world of roving caricatures, Gavin has built an entertaining Speed Painting act - one that has delighted audiences for over 10 years.

This spectacular show not only entertains the audience it leaves then with a last memory of the event with the resulting artworks kept by the client and given away as gifts, auctioned for charity or hung in the office or corporate boardroom.

Gavin has worked for numerous major corporates and multinationals. He has entertained international athletes at the Commonwealth Games, international players at The Australian Open, Celebrities in the Emirates Marquee and VIPs for Crown Casino, just to name a few.  In 2012 he was the caricaturist of choice for Samsung’s major Galaxy Roadshow in Victoria.

Gavin is available for roving caricatures or has the following three stage acts:

Capturing the Essence is a solo act that has engaging audience participation and can be tailored to any client.

The Gatsby Spectacular is a collaborative show with Gatsby inspired dancers providing that extra pizzazz!