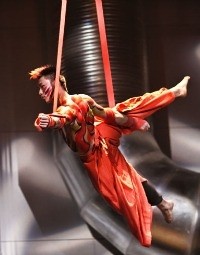 Luke Ha is an Australian born Chinese raised in Melbourne. He's an acrobat, an aerialist, and an artist. After training in gymnastics from a young age, he turned his focus to circus.

He trained at the National Institute of Circus Arts (NICA) in Melbourne and specialised in Straps, Chinese Pole, Flying Fork (a type of contact staff twirling), while also gleaning skills from many other disciplines such as handstands, tumbling, juggling, clowning, unicycling and hand balancing.

At NICA he performed in "20s05", "DiVino" (2006) and the 2007 remounted version of "DiVino" for the Melbourne Festival, the Commonwealth Games Closing Ceremony, and then created his own solo Graduation Straps act.

Having completed my Bachelor Degree he went on to perform in Osaka at Universal Studios Japan in a show called "Fantastic World" and also made appearances in seasonal special shows, one based on the hit anime series "Naruto" and a Monsters Special show. Over his time in Japan, his love of the language and culture grew immensely. It was here he met and began to date his future wife Anni, who was also a performer from Australia. After 11 months he returned home to Melbourne.

He competed in and reached the semi-finals of the television show Australia’s Got Talent (2009) with a Straps act and a Chinese Pole act.

Also over 2009 and 2010, he worked with Stalker Theatre Company creating "ShangHai Lady Killer" which was performed at Brisbane Festival.

He also performed the opening act of Sydney’s 2010 Chinese New Year "Twilight Parade" where he did a short Straps routine from a crane in the middle of George Street.

They were married on the 26th of November 2010 in Doncaster at Ruffey Lake Park. It was a beautiful outdoor wedding and it was nothing short of a miracle of God that it didn't rain on us while it rained and thundered around all other places of Melbourne. It was a true blessing and testimony of God's love for us.

They got married and at the end of 2010, after they returned from their New Zealand and Port Douglas honeymoon, they moved to Macau, China where he began performing in Franco Dragone’s "The House Of Dancing Water". He learned skills in diving, dance, Russian swing, straps and other movements from some of the worlds top competitors and performers. They made some special friends and formed a close family relationship with members of Oasis International Church.

Since 2014 Luke has performed 11 sell-out shows of "The Serpent’s Table" in Sydney Festival, The Lounge: A Circus Cabaret in Melbourne Fringe Festival, performed many Chinese New Year performances along the east coast of Australia and established himself as a qualified stunt performer, gaining credits in Tomorrow When the War Began (TV Series 1), Hacksaw Ridge, Ghost in the Shell and other student films and web productions.