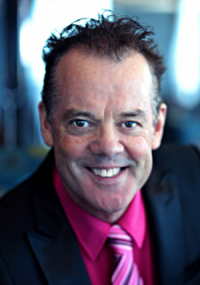 Martin took up the sport of canoeing at a young age and in 1982 represented Australia at the 1982 Marathon Championships. He then went on to represent Australia at the Los Angeles Olympic Games in 1984 in Sprint Canoeing. Often asked if he won a gold medal Martin replies “I didn’t come first and I didn’t come last but I got a real good look at the bloke who did!”

Martin won the National Titles in 1985 and was again selected for the World Championships. As a publicity stunt Martin busked in the City of Melbourne to raise sporting funds to represent Australia. Within 10 days of street performing “the hat was full” and Martin was on his way to the World Championships. Little did he know that this was to lead to a new career.

For over 20 years Martin Ralph has been a Unique World Class International Performer. During this time Martin has perfected his original, impossible to compare performances. Clean, clever comedy mixed with authentic rare skills such as rope spinning, yoyo specialties, whips and amazing gyroscopes to name just a few of his bespoke skills.  Delighting audiences as he shares his world record breaking talents using his huge, self-designed, handcrafted spinning tops.

This act is totally unique; no wonder Martin leaves his audiences wanting more!

Thanks to his elite Olympian athlete and coaching background Martin is aware of what is required to professionally prepare, entertain and captivate any audience. Comedy incorporating Mad Science, Marvellous Inventions, Rare Skills, Personalised Friendly Humour, Bespoke Props and Tailored Motivation is what makes Martin Ralph totally unique and has Martin’s audiences constantly providing him with standing ovations.

His good humour and infectious enthusiasm sees him in high demand as a comedian, master of ceremonies and motivational speaker.