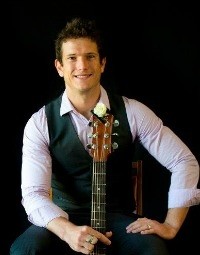 Matt Fasso is a multi-talented singer and guitarist who has quickly become one of South-East Queensland’s most sought-after solo acoustic acts.

Drawing inspiration from his father who travelled the world as a musician during the 60’s and 70’s, Matt grew up surrounded by music. Playing piano from the age of 6 he continued to explore his musical talents throughout his schooling, learning a range of instruments including the clarinet and guitar.
Before the age of 16, Matt was fortunate enough to be provided with a number of exciting musical opportunities including an invitation to perform at the Conservatorium of Music, headline performer in a special Millennium tour of the Whitsunday islands and a unique invitation to play for renowned Australian musician John Foreman.
Once leaving school, Matt focused his attention on acoustic performance and developing an individual style and musical identity. Playing at a wide variety of pubs, clubs and special events he quickly became recognised as a leading musician in the Wide Bay region.
Matt started to focus his attention towards the corporate/wedding market and hasn’t looked back since. His musical style, charisma and professionalism are qualities that have seen him quickly become recognised as one of the leading musicians in South East Queensland.