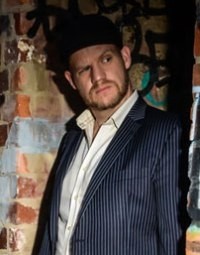 Nicholas J. Johnson is a professional speaker, magician, author and educator who specialises in improving the public’s understanding of deception, and helping them to identify scams, hoaxes and suspect science.

For the past 20 years, Nicholas has worked with businesses, law-enforcement agencies and universities to uncover the tricks behind the tricks. “No one likes the idea of being swindled,” says Nicholas. “But often understanding the reasons why we’re so easily taken for a ride can make us more critical and better able to spot dubious claims in a world filled with fake news.”

In Nicholas’s keynote presentations, you’ll not only witness extraordinary sleight of hand and illusions, you’ll also learn the secrets behind the misdirection, perception and the influence that makes it all possible. Like most children, Nicholas loved magic from an early age. Unlike most children, Nicholas turned it into a career, performing his first professional show at age 10.

After completing a BA Sociology in 2001, Nicholas combined his love of deception and education to create entertaining, enlightening presentations and shows that have earned him the moniker "The Honest Con Man". In the past two decades, he has presented for hundreds of organisations, including ANZ, Microsoft, ACCC, AusCERT, Consumer Action Law Centre and the Financial and Consumer Rights Council.

He has collaborated on projects with scientists from Monash University, RMIT, Swinburne University, CSIRO and the Centre of Excellence for Integrative Brain Function. He's also appeared as an expert on fraud and scams on The Project, A Current Affair, Sunrise and The Real Hustle.

Nicholas is the author of two best-selling novels, Chasing the Ace and Fast and Loose (Simon & Schuster). Both books use fiction to explore the facts behind the world of professional con artists.

One of the nation's foremost authorities on the subject of codology (the art or practice of bluffing or deception), Johnson has on many occasions demonstrated to audiences how easy it is to be fooled, and how enjoyable the experience can be- until the moment we realise we have been duped.

Despite of fooling us over and over again, you just can't help but like him.

The great Nicholas J. Johnson had everyone in stitches at the AusCERT 2017 Gala Dinner.