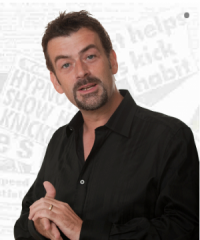 In fits of hysterical laughter, Peter seems to lose himself in each performance, pushing the boundaries of standard hypnotic fair and raising the bar with unique and truly whacky routines.

All of this is delivered with a somewhat wayward humour in his distinctive, mischievous and impish style. Although the observer experiences a rollercoaster ride, on the very edge of what could be considered sane and proper, Peter manages to give us an ample glimpse of potential danger and mind-manipulation- gone-wrong whilst impossibly striking the balance of not taking hypnosis too far.

Beneath the well-publicised image of ‘evil’ and ‘wicked’ he tries hard to portray, there is a warmth, playfulness and overwhelming sense of trustworthiness that belies it.

As well as displaying his skilful stagecraft in venues around the world, Peter has starred in and presented 60 of his own television shows in five different countries. These have been broadcast in more than 30 countries worldwide. He writes and creates unique formats for broadcast in a wide spectrum of genre and devotes much time to his pursuit of knowledge and practice in the field of hypnosis for self-improvement, behavioural modification, extra-ordinary perception, altered states of consciousness and the control of chronic pain.