Tim Griffin and the Instruments Travels from Townsville, QLD 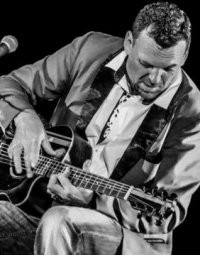 Tim Griffin is a North Queensland based blues and roots musician.

In 2012 he won the Memphis blues challenge in Brisbane which gave him the right to represent Queensland at the International Blues Challenge in Memphis USA. His quarter final result there placed him in the top 100 unsigned blues artists in the world. Tim then travelled to New Orleans and performed several shows on Bourbon St. He released his first album ‘Castle Hill Blues’ on his return to Australia and went on to tour nationally to promote the album.

In 2014 he began writing for his second album ‘Shake Ya Hoodoo’ which was released in 2016. The album is a solid mix of blues, gospel and rock having a powerhouse sound from start to finish.

Tim's first album Castle Hill Blues (2012), has become an iconic blues recording in his hometown of Townsville. The recording is very honest and showcases Tim's abilities as a solo performer. The album received significant airplay in Australia and the US.

Tim's influences are a wide range of artists but the one person who taught him the most about having the right attitude towards songwriting was Willie Hona (Herbs) who is a close friend and mentor. Tim is a proud Kiwi but resides in Townsville.