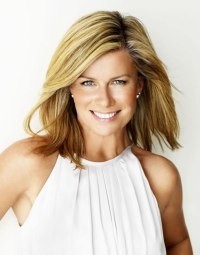 Deborah Hutton is one of Australia's most acknowledged and respected media personalities. Through an accomplished career working alongside iconic Australian companies, Deborah is one person who is able to influence the Australian public and continually exude a persona of trust, intelligence and loyalty.

As a Brand Ambassador/Spokesperson, Master of Ceremonies, Television/Audio Visual presenter, Radio Host, Deborah brings a multitude of warmth, personality and experience to the role and delivers results.

Australians look to Deborah Hutton as a barometer of good taste, style and professional achievement.

Deborah first appeared on the cover of Australian Cosmopolitan at 16. Her modeling career began while she was still at school and led to top international contracts in Germany, Italy and New York, where she worked with the world’s top models and photographers.

For more than ten years Deborah represented the Myer Grace Bros Department store group as their national ambassador and spokesperson and hosted a variety of corporate functions, VIP nights and seminars.

For more than ten years Deborah was an editor for The Australian Women’s Weekly. She started with the beauty pages and then went on to become the Fashion Editor and then an Editor at Large for Home and represented the magazine nationally on television.

Deborah was an ambassador for Qantas for 12 years presenting the in-flight video guide, seen by one million passengers per month worldwide.

In 2006 Deborah became the brand ambassador for Olay Regenerist and also created her own brand of eyewear “Deborah Hutton Optical”. She was the spokesperson for the ‘Living at Hyatt’ development at the Hyatt Coolum on the Sunshine Coast.

In 2011 Foxtel signed Deborah to host a series of programming initiatives for the highly successful Bio Channel and recently announced an extended role hosting The Foxtel Movie Show on Arena.

In 2012 Deborah founded ‘Balance by Deborah Hutton’ which is an on-line community designed to help women with practical advice around maintaining balance in their life.

At our March Breakfast, we had the pleasure of having Deborah Hutton join us as key note speaker. Deborah delivered a fantastic address of her own life experiences giving the audience a “driver’s seat” into the journey of her early days as a model and where it took her in life, love and business. The audience was clearly engaged from the start with Deborah’s ability to associate her story back to the realities of life that all of us go through on a daily basis. Whilst conveying some of the high points and low point on her journey, I was particularly impressed with how Deborah took the time to relate key messages back to our business audience on decision making, perception, and importantly having the ability to drive your own beliefs through going after what you set out to achieve. More so, Deborah delivered this key address in a light and engaging fashion that kept the audience tuned in and smiling all the way through.

Thank you again for speaking at our Women in Business lunch on Friday. Your presentation really hit the mark with our audience!! Not only were you incredibly entertaining with your wonderful sense of humour and interesting stories, but you shared with us so many insightful lessons you had learned which can apply to all of us.