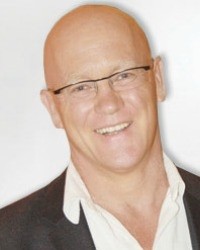 Dr Peter Dingle (or Dr Dingle) has made public speaking an art. His presentations are enthusiastic and inspirational, entwined with memorable stories and spiced with a slice of magic. He interacts and motivates. He takes complex scientific information and converts it so that it is dynamic, easy to understand and informative.

He is also a group hypnotherapist and motivational coach to some of Australia’s elite business people. In his spare time he practices what he preaches, rides a bicycle to work, loves his family, the beach and the gym, juggles, meditates, plays with a unicycle and cooks a mean minestra (but not all at the same time!)

Dr Dingle has spent the past twenty five years as a researcher, educator and communicator. He has a Bachelor of Education in Science, a Bachelor of Environmental Science with first class honours and a PhD (1994). He has more than 100 scientifically reviewed papers, 10 books including "A supplement a day keeps the doctor away", "The great cholesterol deception", "Take control" and "Realise your potential". He conducts ongoing research into diet and nutrition, lifestyle and environmental impacts on health, well being and productivity. Dr D is one of the rare speakers who conducts and presents his own professional research. He is internationally recognised and often quoted by other speakers.

Dr Dingle was an Associate Professor and leading researcher in Health and the Environment at Murdoch University. In recognition of his excellence in teaching, he won the University’s “Teaching In Excellence Award” in 2001 and 2003, he won the coveted Vice Chancellor’s Award for outstanding community service. In 2003, Dr Dingle was a co founder in the award winning Living Smart Program which won the WA Adult Education Award in 2003 and the Eureka Award with $10,000 prize money in 2004. In 2004 he was recognised with special commendation in the WA Environmental Awards and Greenhouses won the best education program and in the same year won the Conscious Living, Nova communicators award. He recently retired after 6 years as a director of the National Registration Authority in Canberra and the Amanda Young Foundation, and is currently a Director of Dingle and Bird Environmental.

Dr Dingle commits to over one hundred public and professional presentations each year. Demand is so high he may present up to 6 times a week. He is popular nationally and internationally for his lively presentations and has presented in 11 countries on 4 continents.

Dr Dingle has appeared on the media for the last 20 years as expert in environmental and health issues and recently presented in the award winning 7 week TV series shown on SBS and now around the world “Is your home killing you”. He is currently in the planning stages for another TV series.

He is a regular on current affairs programs such as Today Tonight and ABC programs like “Can we help” and featured on "4 Corners" and "The 7.30 Report". He is a regular on Australian and New Zealand (TV3) TV and radio news and presents a weekly radio program on 6PR and 96 FM and does a fortnightly program with ABC regional radio. He is reported weekly in the national media and writes a column for The West Australian and a few public magazines.

For the past 18 years, Dr Dingle has been researching active learning and success strategies to increase the productivity and wellbeing of individuals and organisations. He integrates the top tried and true methods via the experts, along with newer discoveries into memory, goal setting, brain function and emotional perception. Incorporating his study of clinical nutrition and exercise, Dr D has developed ‘THE DEAL,’ his own unique program for individual and corporate success and wellbeing.

He uses his ongoing personal research plus discoveries drawn from top scientists around the world to constantly update his program, maintaining cutting edge science.

Peter Dingle has got to be one of the best speakers on health and wellbeing in Australia. Not only qualified, entertaining and fluent as a speaker, he "walks the walk" which gives his presentation that extra credibility. My clients and staff loved him; heaps of practical points to take away and comments like "what a great guy, I was inspired!"

Dr Dingle... probably the most energising, directly challenging and immediately rewarding presentation we have ever had at a leadership forum; certainly the most talked about afterwards.. Thanks Peter for rallying us to action.

Peter has an energy and enthusiasm that few presenters possess. His knowledge and presentation style, which is laced with humour, endeared himself to our audience and had them engrossed. Almost without exception the audience wished his presentation did not have to end.