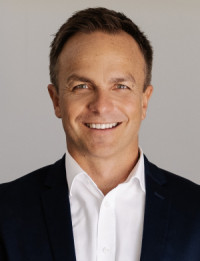 Aaron has a unique and inspiring story.  Originally from a corporate background as an IT Account Executive, the fuse for his industry-leading work in wellbeing & mental health was lit when in 2003 during an extended period travelling living and working overseas Aaron experienced a period of depression and suicidal thinking following the sudden death of a young friend.  Aaron returned to Australia and was inspired at 32 years of age to change careers to focus on mental health.

Combining his clinical mental health background and corporate experience, Aaron’s mission is to crush the stigma associated with seeking support and inspire people to focus on, improve and maintain their wellbeing.

Aaron is a former Senior Mental Health clinician and trainer with the Department of Health and has spoken and lectured widely on mental health.  Aaron has been a speaker and chair at major clinical conferences including the International Mental Health Conference, National Suicide Prevention Conference, 2016 National AMHSW conference and the Australian National Rural & Remote Telehealth Conference.

In 2015, Aaron co-founded Mindstar: a national wellbeing and mental health company.  Mindstar’s mission is to make Australia the happiest, healthiest country in the world.

Aaron’s newest initiative is UNPACK: “The show about life shit”.  Where he interviews people high profile & inspirational people from all walks of life, talking to them about their remarkable stories of wellbeing and resilience.