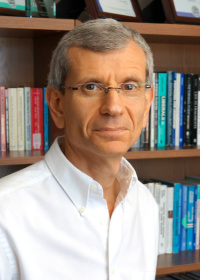 Dr Isaac Prilleltensky holds the inaugural Erwin and Barbara Mautner Chair in Community Well-Being at the University of Miami. He has published 12 books and over 140 articles and chapters. His interests are in the promotion of well-being in individuals, organizations, and communities; and in the integration of wellness and fairness.

Isaac is the former dean of the School of Education and Human Development at the University of Miami, where he also served as vice provost for institutional culture. He was born in Argentina and has lived and worked also in Israel, Canada, Australia, and the United States. He is fluent in English, Spanish, and Hebrew, and proficient in Italian. He has given keynote addresses in 27 countries.

He leads a research team that developed fun for wellness, a research-based online platform to promote health and wellness using videos, games and humor. He eats mostly a plant-based diet and is a fitness aficionado. He is also a humor writer. Isaac won an award for his humor writing in 2015 by the National Newspaper Association. His most recent book is How People Matter: Why it Affects Health, Happiness, Love, Work, and Society, co-authored with his wife, Dr. Ora Prilleltensky.