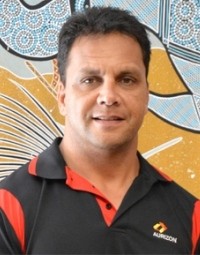 Steve Renouf, aka the Pearl, is a well-known Aboriginal rugby league player who played for the Brisbane Broncos, Queensland and Australia in the late 80s and 90s.

When nine-year-old Steve Renouf started kicking a footy across the fields of his small Central Queensland town, he never imagined that he would one day score the winning try in a World Cup match. He never imagined that he would develop type 1 diabetes. And it never crossed his mind that he would rise to the challenge of caring for three children with diabetes and establish an organisation with his, then, wife Elissa to support families living with children with Type 1 Diabetes.

Steve was 17 years old when he signed with the Brisbane Broncos in 1987. The young footballer showed much talent, and his future looked promising. However, at age 23, he suddenly felt seriously ill. When the doctor told him he had type 1 diabetes, Steve was actually relieved. Having type 1 diabetes for most of his professional football career, Steve not only lived with diabetes - he excelled with it.

He went on to create his legend which put him in the top 10 try scorers of all time in the National Rugby League premiership competition. He also made the Queensland State of Origin team in 1991 before progressing to the Australian side in 1992, a year that saw him make the winning try in the World Cup. He signed with English team Wigan in 1999 and was selected in both its 2000-2001 dream teams before he retired in 2002.

Following his return to Australia he continued playing football for Easts in the Queensland Cup alongside former Broncos teammate Darren Smith. During the 2007 season at the Broncos' 20-year anniversary celebration, the club announced a list of the 20 best players to play for them to date which included Steve.

In August, 2008, Steve was named at centre in the Indigenous Team of the Century. His biography, "The Pearl", is a moving story of Steve, his family, and his Aboriginal identity. The story is written by sports journalist and broadcaster, John Harms and the book recounts Steve's football career from his first junior game to his last A-grade match in the Queensland Cup competition.

On leaving the game, Steve worked as a Queensland Government sports and recreation ambassador for eight years (promoting healthy lifestyles and physical/outdoor activities amongst children) before taking the role of Indigenous strategy manager for Australia’s largest rail and freight operator, Aurizon Rail and Freight.  Steve coordinates education, employment, and job opportunities; cultural awareness and careers across all of Aurizon business units for Aboriginal and Torres Strait Islanders.