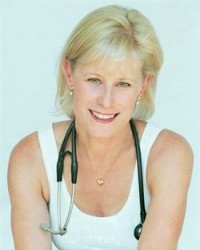 Dr Penny Adams is a practicing GP. She combines her 23 years' experience in general practice with a passion for health promotion via her popularity as a media personality commentating on issues such as Childhood Obesity, Mother Guilt, Eating Disorders and Secret Men's & Women's Business. Penny has a reputation, not only with her patients, but also media audiences for her caring nature and a lively sense of humour. An expert in general practice, her attitude to continuing her extensive medical knowledge is best exemplified by the fact that in typical Penny fashion, she wasn't satisfied with just attaining an RACGP Fellowship, she had to top the Nation. Penny has been involved with both print and television media over the years. She was a regular medical columnist for "Ask the expert" in Woman's Day, and Health writer for "Essentials" in the Sydney Morning Herald.

Dr Penny is the host of the medical advertising television show "Feelgood" and regularly appears in TVC's, infomercials such as the Probiotics Yakult in 2004 and Erectile Dysfunction in 2002. Dr Penny was the current resident GP on the Mornings with Kerri- Anne.

Penny co-authored "Motherguilt" with Ita Buttrose. This book, which reached the top 10 non-fiction bestsellers, deals with issues facing mothers in the 21st century. As well as appearing in the media regularly and having written a book Dr Penny Adams is a fantastic guest speaker and can speak prolifically on a variety of topics.