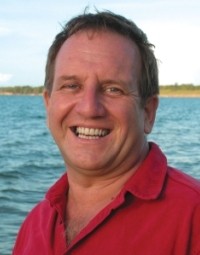 Bill Zammit’s life journey has been filled with colourful, challenging, creative and compassionate adventures. His varied career includes being a Melbourne tram conductor, masseur, white water rafting guide, PNG missionary, bread making instructor, Family Day Care worker and Safari business owner in Darwin, Australia.  From a migrant family in inner city Melbourne who had the foresight to send him to the Boy Scouts as a child, Bill has forged a fabulous career and now shares his insights and anecdotes as a gifted orator.

Following the sale of his safari business in 2002 after contributing significantly to the tourism industry strategy in the Northern Territory and Asia, Bill travelled to India to study the enlivening practice of Laughter for no Reason – or Laughing Yoga.  There are no tricky yoga moves in this refreshing stress busting practice, just lots of laughs and a fabulous method of reducing tension and reviving flagging spirits. This lead Bill to pursue his passion for people and happiness.

Today, Bill is an accomplished and professional public speaker on the theme of happiness in the workplace and in life. He was the keynote speaker at the Laughter Wellness Conference in Melbourne, October 2016 and presented at a TEDx talk in Darwin.

Bill's more recent adventures include him being the sports psychologist and team masseur for the Timor Leste Olympic Ski Team at the 2014 Winter Olympics. While in Sochi, Bill also donated his services to the Maltese, Moroccan, and Slovenian Olympic teams who were equally small and could never afford the services of a team motivational coach or masseur.

In addition to all this Bill was a consultant to the Department of Asian Engagement, Darwin in 2015-2016, drawing on his understanding of the tourism industry, and he is now also the Australian Ambassador for the Timor Leste Horse Breeders and owners Association. Bill’s significant international experience means that he has true intercultural sensitivity and understands the needs of different people in different contexts and workplaces. This allows him to tap in to their motivation, making his presentations not only relevant, interesting and positive but leaving all kinds of audiences feeling refreshed and revitalised.

Bill Zammit continues to inspire our Management team. After every session with Bill we are ready to take on the world. We recognise the importance of laughter, the therapeutic benefits and how the way we act and our persona impacts on the rest of the team. It is vital to focus on our wellbeing end enjoy laughter in our day to day work and reap the benefits of such an easy act. Bill is an amazing story teller who influences your life perspectives in a very positive and real way. Experience laughing yoga and judge for yourself the benefits – they are physically and mentally very rewarding.

Feedback about your two sessions was very positive and often talked and laughed about by delegates. Comments on the evaluations forms were: "Helps deal with stress", "Good fun", "It made me relaxed and happy", "This was fantastic", "Very much a good stress reliever for such a busy job", "Felt great afterwards and I think it will help me a lot", "Some people just forget to laugh at life", "Wonderful foundation of knowledge and for practice", "Great to unwind and meet people especially at the beginning of a training session". Many thanks.