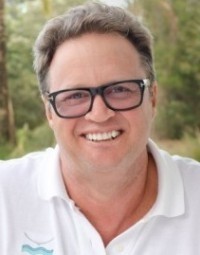 Brook Ramage is recognized in Australia as the most experienced influential and innovative leader in the Health Retreat business.  Over a 25-year period he has created and managed three of Australia’s leading Health Retreats.    Brook has recently completed a successful appointment over four years to the role of General Manager and Wellness Director at Peninsula Hot Springs.  During that period he was successful in winning the best ecotourism destination three years in a row in Victoria and best Destination Spa in the World context.  He was responsible for overseeing a 15 million dollar development which increased the capacity of Peninsula Hot Springs by a third and the responsibility and care for 360 staff.

Brook has written for many newspapers and industry magazines on health, lifestyle and stress management. His enthusiasm and expertise has meant he has been sought after for media interviews and regular appearances on TV and radio. Brook has presented nationally and internationally to many companies on the subject of stress management and resilience. Brook’s message on health and fitness is not only a great source of entertainment but will leave individuals with real benefits to their performance and quality of life.