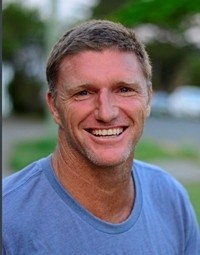 Unchallenged as ‘the greatest Ironman in the world’ Trevor Hendy is a legend in his sport. No other competitor has reached his heights. He has won six Australian Open Ironman Titles surpassing Grant Kenny’s record of four. He also won four consecutive World Ironman Titles and he was a four-time winner of the Uncle Toby's Super Series.

His success, together with his down to earth attitude, is testament to Hendy’s role model status for all Australians. This was recognised when he was awarded as a member of the Order of Australia.

Trevor is now a trained facilitator and presenter of personal growth workshops and uses this skill to assist real change for his audience. He now tours the country on the speaking circuit furthering his own learning and sharing everywhere he can, both from the old sporting anecdotes to the new inspiration that he has found in living his life after sport.

Trevor fills his days training and mentoring a handful of clients with no prejudice towards skill or achievement level. Whilst he loves to guide anyone who wants to make a change, his client list also includes some of the world's sporting and business elite. He mixes his experience as a counsellor, life coach, sporting coach and elite athlete to guide everyone he works with, to bigger and better things. He specialises in connecting with his clients at a deep enough level to find the personal negatives holding them back and unleash the passion they need to “go the whole way”.

He is a renowned and highly sort after problem solver, specialising in conflict resolution and works regularly with large corporate organisations to inspire and unite their teams with an emphasis on creating a wave of success and riding it. He personally customises his corporate programs and guides his clients with the care and commitment he would give a family member.

Trevor lives on the Gold Coast, Australia and travels the world working in the field of Truth and Wellness and speaking on/for awareness, motivational and community based projects. He summarizes his life philosophy when he says “Bring it into Now and never underestimate the power of who you are.”