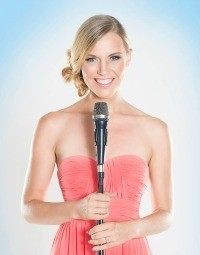 As a Port Douglas and Cairns wedding singer, corporate singer, and entertainer for private functions, Andrea can be booked Solo, as an Acoustic Duo, with a Jazz Band or Jazz Trio.

From Jazz, Soul, Pop and Easy Listening during canapes, dinner or cocktail hour to Dance floor favorites- Both Classics and Contemporary- Andrea can build the tempo through the evening from a relaxed and classy vibe into a fun, full party atmosphere, all tailored to your preferences and vision. Her diverse range of repertoire gives her the amazing flexibility and adaptability to suit a wide variety of occasions and audiences and a large number of locations from Port Douglas, Palm Cove and the Tablelands to Mission Beach and everywhere in between.

Whether singing background music during dinner or filling a dancefloor, Andrea's vocals and vast range of repertoire bring a unique ambience and presence to any event. Most notably, Andrea has had the honor of performing at the London Palladium for Andrew Lloyd Webber, and toured for 4 years internationally in the successful tribute concert, ABBAMANIA as lead singer and Master of Ceremonies.

She has also appeared throughout the United States and Canada with the London Symphony, the San Diego Symphony, the Colorado Symphony, and at Toronto's Roy Thomson Hall.

In addition to being a featured support act for Dami Im, Andrea is an experienced corporate singer and wedding entertainer who performs at a variety of top local venues, and has appeared with Cairns best bands, DJs & entertainers including Rhys Tolhurst, The Tall Poppies, Hip to Soul, Vikarious & TOPShelf, as well as being a featured anthem singer for the Cairns Taipans.

She also starred in the Cairns Civic Theatre productions of "Phantom of the Opera" as Christine, "Legally Blonde" as Elle Woods and "Joseph and the Amazing Technicolor Dreamcoat" as the singing Narrator with the Cairns Choral Society.

With so many years of professional experience under her belt, Andrea will add a touch of class to any event, party, corporate function, wedding ceremony or reception.