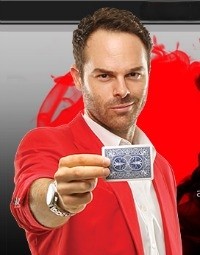 Mike Tyler is a modern magician who focuses on creating a memorable and engaging experience by combining personality, humour, stage presence, and sleight-of-hand skill.

He has performed live shows in over 250 cities across 7 countries, headlined international comedy festivals, and starred on London's West End. Over 50 million people have witnessed his primetime TV appearances in Australia, New Zealand, America, Canada and the UK.

Considered one of Australia's favourite magicians and corporate entertainers, Mike is guaranteed to impress!

Roving Interactive Magic:
Mike engages your guests up-close in a social setting with clean, hilarious, and amazing magic and mind trickery. This includes trickery with cards, balls, coins, fire, napkins, money, rings, and even borrowed items. Some of it is known to happen literally IN THE HANDS of the audience. Mike started his career as a close-up magician and is now considered one of Australia’s best.

Comedy Magic/Mentalism Show:
A comedy magic show that combines mind-blowing magic, cutting-edge mind trickery, and side-splitting comedy. Mike’s informal show is clean, hilarious, interactive, and memorable making it the topic of conversation long after the event. It’s different to some magic shows as Mike removes any “cheesiness” associated with classic magic and includes the use of psychology, predictions, and mind reading that will have guests in awe. A crowd pleaser!

Comedy Hypnosis Show:
Mike adds youth and flair to the ancient art of hypnosis as his show sees members of the audience becoming the true stars of the stage: saying and doing things they would never otherwise do. It’s all REAL and must be seen to be believed! Minimum show length is 60mins and ideal for audiences over 100 people who are interested in an unbelievable, hilarious and unforgettable night!

Our entire audience was in stitches and mystified with his mind blowing hypnosis.

Mike is by far the most talented magician we have ever seen.