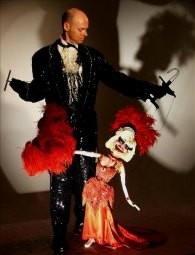 Murray Raine’s initial interest and love of puppetry was triggered at the early age of six. Following a performance by the iconic “Marionette Theatre Of Australia” at school, he knew a career in puppetry was his destiny!

Now four decades later Murray is regarded as Australia’s leading “cabaret” marionettist. Since 1985 he has toured in Australia’s major theatres including principal roles for the "Marionette Theatre Of Australia", "Sydney Puppets", "The Performing Puppet Company" and "The Jim Henson Company" USA, famous for The Muppets.

Murray’s vast career in puppetry has led to an outstanding body of work in theatre, film, television, major corporate functions, cruise ships, International arts festivals and television commercials, as well as directing and lecturing in the art of puppetry. In 1988 he was chosen to study with the world-renowned French theatre company “Phillippe Genty Co”.

He has had numerous television credits including "The Midday Show", "Wonderworld", "The Andrew Denton Show" and "Good Morning Singapore" just to name a few! The countless television commercials include the famous pasta family for "Dolmio Pasta Sauces" in Australia and the UK.

Murray is perhaps most regarded for his own amazing solo cabaret shows. His enormously popular family show “It’s Raining Puppets!” has enthralled audiences across Australia, Singapore, Thailand, Taiwan, the Philippines and such exotic ports as Dubai in the Middle East. A command performance for royalty at the palace of the United Emirates was a highlight and shows the high esteem in which this international artiste is held.

Apart from the demands of International arts festivals and headlining for major cruise lines, Murray is highly sought after for his exhilaratingly wicked cabaret revue "Follies Fantastique" featuring an eye-popping cast of dazzling burlesque beauties. His dedication to the art of puppetry has twice won him the prestigious Australian entertainment industries Mo Award for " Australian Speciality Act Of The Year'', he is the only puppeteer to have been the recipient of this honour.