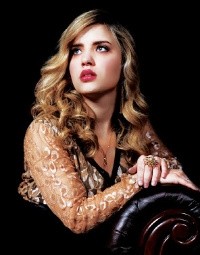 Rachael smashed Australian television records and was nominated for TV moment of the year in the AACTA Awards when 4.1 million people tuned in to watch her Blind Audition on the first season of The Voice (2012). With a career that has seen her release four top 10 ARIA charting albums, tour live shows to sold out crowds and travel to Italy to sing with Andrea Bocelli’s orchestra, Rachael has shown that she is capable of achieving anything despite being legally blind.

Rachael’s latest album, Shadows, debuted at #5 on the Australian Album ARIA Chart. Shadows marks Rachael’s transformation from a shy teen to a strong young woman. Sadness, a frenzy of notes from frustration or elation and a spattering of words from love or heartbreak. Rachael writes songs to connect with people and help them through each phase of life, as music has always helped her.

Three years of writing, recording, hard work and love... Following the win of People’s Choice Pop Award in the South Australian Music Awards, Rachael embarked on her biggest tour yet of Australia. Rachael allowed audiences a glimpse behind the curtain - an intimate look into the world of a true artist. Rachael has performed the national anthem for many events including the Slowdown and Adelaide 500, toured a cabaret show about her life called the “Colours Of My Life” around SA, participated in SA Tourism’s latest campaign and released a single of an “Ave Maria” duet with The Voice 2017 artist and fellow legally blind person, Lara Nakhle.

Rachael loves to motivate others to challenge their limits with her public speaking. In the past she has appeared for the Royal Society for the Blind, CanDo4Kids, Julia Farr Association, Halogen Foundation and most recently, She The Change as part of a women’s empowerment event. Along with her speaking, she is passionate about philanthropy, having been an ambassador for the Royal Society for the Blind since 2011, as well as supporting other causes she’s passionate about such as the Cancer Council, Starlight Foundation, CanDo4Kids and Cure Brain Cancer. She believes that helping others is the most important thing you can do for the world.

Bolder than ever, Rachael has learned to expose not only her vulnerabilities, her fears and regrets but also to share her message of resilience and determination to face the world head on through music. Rachael has the charming ability to hold an audience in the palm of her hand with emotional moments one minute and singing and dancing the next. With her signature hauntingly-beautiful vocals, Rachael has revealed more of her story previously hidden in the shadows.