The Idea of North Travels from Sydney, NSW 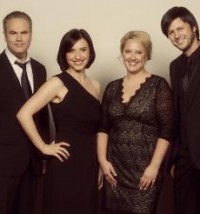 So who are The Idea of North?

In short, they're a quartet of musicians, serious about their music without taking themselves too seriously.

Their instrumentation: voice (soprano), voice (alto), voice (tenor) and voice (bass), with a little bit of vocal percussion thrown in. They have a beautifully distinct sound and style, but they cross many musical genres: jazz, folk, gospel, pop, classical, comedy.

While the group's overriding style is to sing without instruments (a cappella), The Idea of North has a wide range of shows with broad appeal and entertainment value. They move their audiences from tears to laughter and create a rapport that reaches all ages and tastes. The typical audience response to all their gigs is a mixture of awe at their musicianship and sheer enthusiasm for their showmanship.

"[The Idea of North] is one of this country's most unique live entertainment acts... a perfect entertainment solution." - James Morrison

With four 'Mo' Award nominations, two ARIA awards and a number of recording and performance awards from the USA under their belt, The Idea of North has truly reinvented its musical style and have 'rescued instrument-free singing from the 80's'(Sydney Morning Herald).