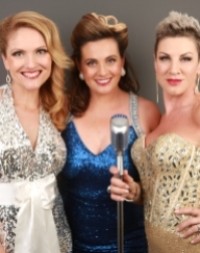 Three of the Sunshine Coast's most loved performers (Michelle Brown, Renae Suttie and Susanne Campbell) have united to form the all-female powerhouse trio, The Kitty Kats. With inspiring and electrifying songs, and either an incredible 9-piece Big Band or fabulous 5-piece band, The Kitty Kats are proud to be "bringing booty back".

With a sassy mix of cabaret, swing, jazz, blues, rockabilly, rock n roll and 3-part acapella harmonies, The Kitty Kats will have you dancing, crying, singing, laughing out loud, and “loving the skin you’re in”.

Michelle Brown
Michelle Brown has been performing for over 20 years and is known for her bluesy voice and dynamic stage presence. Michelle is one of the Sunshine Coast's biggest entertainment drawcards and has a large and loyal following. This multi award winning performer cut her teeth in the Queensland blues circuit with acclaimed guitarist Peter Steele before becoming the powerhouse front woman for the incredibly successful and APRA award winning New Orleans Blues Trio “The Big Easy”. An iconic stalwart of the festival circuit for many years including Kangaroo Point Jazz & Blues Festival, Brisbane Blues Festival, Broadbeach Blues Festival, River Fire, Gympie Muster, Dingo Creek and several years headlining at “The
Blues Tent” at Woodford Folk Festival just to name a few.

Over her many years in the East Coast Blues Scene Michelle has performed with artists such as James Morrison, Phil Emanuel, Doc Span and Lil Fi. Recently she has teamed with long time musical partner John Maier and S.E.Q. Blues veterans Bob Ward and Terence Bernard to form “Redbelly Black”, a polished trio favouring raunchy blues and footsy-funk. Michelle blends soulful, emotive vocals with a unique style that stimulates, mesmerizes and moves her audience from start to finish.

A national finalist in Best Female Blues Singer category at the Australian Blues Music Awards, Michelle’s reputation is not without warrant. Michelle has that special X factor honed through years of solo and group performances. With her haunting, gritty, big bluesy voice, outgoing personality and dynamic stage presence Michelle, has gained a reputation for a consistently stylish & polished performance.

Following her jazz studies at the Queensland Conservatorium of Music, Renae has been performing professionally for the past 22 years. She has worked the international 5 star hotel circuit extensively in countries such as Japan, China, Hong Kong, Thailand, Fiji, Kuala Lumpur, New Caledonia and Vanuatu.

With the gift of “perfect pitch”, Renae can be heard on many Australian television and radio advertisements, including Channel 7’s Love You Queensland and The Golden Casket Winners Circle.

From television to cabaret, from session singing to production shows, big bands
to blues and rock bands. Susanne is a singer who has embraced them all with her
diversity as a professional entertainer in the music industry spanning more than 20
years.

Susanne has been a featured artist for prestigious venues in Australia such as
the Sydney Opera House, the Sydney Entertainment Centre, Stadium Australia and the Superdome to name a few. Susanne was also a regular on Australian Television shows such as the Midday Show and Good Morning Australia.

In the early nineties Susanne had the honour of singing the National Anthem for
the State of Origin. Susanne has many years of training and experience working under the guidance of one of Australia’s great Showman – The Late Bobby Limb. Susanne has been recognised as an exceptional talent in the music industry. She has been nominated for a Mo Award in 2001 at the Sydney Town Hall for Female Variety Performer of the Year, just before leaving Australia to sing in production shows overseas.

I just wanted to touch base with you to thank you so much for you fabulous performance on Saturday night at the Mater Little Miracles Ball. The guests absolutely loved you guys and we have received alot of positive feedback – both on the night and into this week from guests and Mater Foundation staff. I have been told on a number of occasions that guests were up on the dance floor much earlier than at any other Ball and the most guests ever on the dance floor, so that’s a sign that everyone was enjoying themselves! I had several guests come up to me on the night and ask who you ladies were as they loved you so much!

Wonderful afternoon – “THE KITTY KATS" really put their heart and soul into entertaining us. Renae, Susanne and Michelle worked the audience with their saucy moves and sassy songs; feather duster 'tickles' and didn't the 'boys' love it : "Not only a feast for the ears, but a feast for the eyes too!" Three sparkling costume changes, a variety of jazz, swing, boogie and blues, as well as a bracket of old-time rock'n'roll mixed with acapella and a touch of classic ballads kept the pace interesting and appealing. Worthy of a much greater audience range than just jazz fans, we hope the Kitty Kats will return to a bigger Bundaberg stage. Really a top-class act and we are proud to have been part of it.