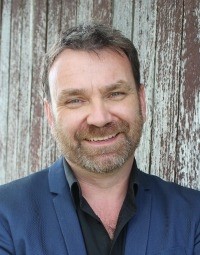 Andy Ridley is CEO of a new foundation - Citizens of the Great Barrier Reef. The organisation is being developed to engage millions in the future of the reef, and by implication the future of our planet. Central to the development of the organisation will be the use of digital connectivity and the role of the circular economy in reducing emissions and providing a prosperous future both in the region and globally. A focal point is the use of digital to activate citizens behind our common purpose. Launch will be late 2017.

Prior to this Andy led the rapid growth and evolution of Circle Economy in Amsterdam. He believes the circular economy provides many of the answers to some of the biggest environmental challenges that we face as population grows beyond 9 billion, and we address the great generational challenges such as climate change. At Circle Economy, they focused on practical and scalable tools and programs to help accelerate the adoption of the circular economy in cities, businesses and communities around the globe. These circular principles form the base for his work on the Reef.

As founder and CEO of Earth Hour, Andy spent eight years growing the award-winning campaign from concept and inaugural event in Sydney, to the largest mass participation movement in history, engaging hundreds of millions of people in more than 7000 cities on every continent. Earth Hour was not only a 'lights off hour' but also delivered significant environmental outcomes through local digital and on the ground campaigns in multiple countries around the world, including leading to the protection of several protected areas in South America and Russia.

Conceptualised and implemented as one of the worlds' first 'open source' campaigns, Earth Hour had a clear mission to engage a much broader audience than traditional environmental movements. Earth Hour built a unique foundation of individual participation, volunteerism, corporate social responsibility, non-profit organisations, social sector, entertainment industry and government bodies unified by smart use of digital and on the ground activity and marketing collaterals.

He strongly believes that the power of the crowd offers us opportunities as yet untapped to change the world we live in, and whilst the challenges around the globe are immense, we are the first generation in history to have the tools to enable us to utilise this power.

In 2018 Andy was awarded the GQ Award for Social Force in association with Audi.