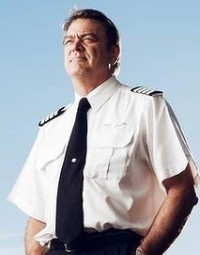 Captain David Evans was the Senior Check Captain on board the Qantas A380 during a major incident in Singapore in 2010.

His job is to train and check Qantas pilots on the Airbus A380 Super Jumbo. Captain Evans has some 35 years of experience and almost 20,000hrs of flight time. He has extensive training experience on all Long-haul aircraft and in 2005 was invited to be part of the team that introduced the A380 Super Jumbo to the Qantas Fleet.

Since the incident David has been invited to address Air France and British Airways pilots on the CRM (crew resource management) and risk assessment and mitigation used. This has led to several keynote addresses to the aviation, medical and other industries on how to solve complex problems.

In the modern society we rely on technology to solve our problems but we must not forget the 'Human Factors' namely Teamwork, Leadership & Management, Decision Making, Communication and Situation Awareness.

At the time of the incident he was conducting a 'Route Check' on the operating Captain as well as training a new 'Check Captain' and thus was very much a part of the drama as it unfolded. The other flight deck crew were Richard de Crespigny (Pilot in Command, 15,000hrs), Harry Wubben (Route Check Captain, 20,000hrs) Matt Hicks (First Officer, 11,000hrs and Mark Johnson (Second Officer 8,000hrs). With the Cabin Service Manager (Michael Von Reth) this team boasted some 140 years of experience and over 71,000 flight hrs - a significant factor in the successful outcome of the incident.

He was interviewed by the Royal Aeronautical Society in London on the 6th December 2010. In the interview he describes how the crew reacted to the uncontained engine failure and discusses the decisions the crew had to make. In particular, he considers that the most serious part of the whole incident being the time on the runway with fuel leaking over hot brakes and an engine that wouldn't shut down. He also says that later they tried to recreate the whole incident in the simulator but couldn't! Finally near the end the of the interview he says that common sense and airmanship took over, they couldn't blindly follow the ECAM messages.

We have received positive feedback from our Parts & Service Managers Annual Business Forum, some even commenting it was the best yet. We did not hear of any constructive criticism regarding your presentation as such, only positive reviews. Some verbal feedback received from one of our toughest critics was that he desperately needed to use the bathroom during your presentation, but could not leave as you were too interesting!