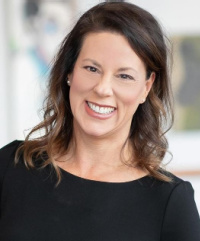 Darcy Luoma, CEO and founder of Darcy Luoma Coaching & Consulting is one of America’s most highly credentialed coaches. She’s worked in 48 industries, with 210 different client organizations, and has impacted tens of thousands of leaders and employees.

The University of Wisconsin–Madison, a Big Ten university, sought out Darcy to design its rigorous 9-month-long professional coach training program, which earned the International Coach Federation’s accreditation, and has a waiting list every year. She also served as the program’s director and lead instructor for five years, and now holds the title, Director of Training and Quality Assurance.

She completed her Master of Science in Organization Development at Pepperdine University–Graziadio Business School where she did her master’s thesis on “the effectiveness of coaching on overall life satisfaction.”

Darcy began her own coaching and consulting firm in 2013 and built it into a half a million dollar a year company in a short amount of time in a challenging industry. Before launching her firm, she worked for a leadership consulting firm and ran U.S. Senator Kohl’s office for 12 years (Kohl was president of Kohl’s department stores and owner of the Milwaukee Bucks basketball team), where she was entrusted to handle sensitive, urgent matters and contentious situations. She met with savvy lobbyists and concerned citizen groups, organized political events and rallies with tens of thousands of people, and managed protestors who staged die-ins and hijacked her office for days at a time to protest the war, requiring her to sleep there with federal protective services by her side.

She worked in Florida for 38 days on the gruelling presidential recount. She’s done national advance work for the White House, travelled the country for a year while working for two U.S. presidential campaigns, and served as a trusted advisor and Deputy Transition Director to a Governor.

She received the prestigious Certified Speaking Professional™ (CSP®) designation from the National Speakers Association in 2019, held by fewer than 20% of professional speakers worldwide. The CSP is the speaking profession’s international measure of speaking excellence and signals a proven track record of experience and expertise, as well as a commitment to outstanding client service, and ethical behaviour. Prior to that, Darcy earned the “Rising Star” award from the National Speakers Association – Wisconsin Chapter in 2017. She has spoken at more than 500 events, conferences, workshops, and corporate events in the past eight years in front of audiences ranging from 25 to 2,500 every month.

Darcy is a lifelong learner. Okay, a self-help junkie. She is continually studying the best ways to develop strong leaders, create high-performing teams, and transform organizational culture. As such, she regularly has ten books on her nightstand, attends professional conferences and webinars more often than she goes to the movies, and has more degrees and certifications than shoes. Her Thoughtfully Fit model weaves together all of her research on the hurdles that get in the way of being high-performing to help leaders be intentional in all their interactions for greatest impact.

As a regular contributor to NBC15 and WKOW27 in Madison, Wisconsin, she’s affectionately known as The Official Life Coach of The Wilde and Tausch Show on ESPN radio. She is an athlete and has participated in 22 years of triathlons, including a full Ironman, six marathons, and too many other races to count. At age 16, she rollerbladed 300 miles from northern Minnesota to the state capitol to raise money for the March of Dimes. She uses her grit and determination in both her athletic and professional endeavours.

She was featured on the cover of BRAVA Magazine where she shared the story of how her life blew up in the most extreme way when her husband of ten years, and full-time stay at home dad, was unexpectedly arrested for sexual assault of a minor he met online. He was sentenced to ten years in federal prison. Darcy became ground zero to test drive her new leadership model, Thoughtfully Fit, that was finalized five days before his arrest. It became her lifeline to handle the daily stressors of navigating the legal system, filing for divorce, parenting two daughters on her own, keeping her company alive, and learning to use the washing machine.

Along with her favourite job being a mom of two energetic teenage daughters, she enjoys adventure travel, yin yoga, kickboxing, spicy chai lattes, and afternoon naps. She is an avid triathlete and Ironman. While she has a double major in German and Mathematics, the only time she uses these skills is when trying to double a recipe for German Black Forest Cake.

'It’s a rare person who profoundly connects with their audience and teaches some practical lessons in less than 30 minutes, yet Darcy Luoma readily accomplished both. Darcy graciously agreed to speak about resilience to our women’s business forum via a new online platform. She shared personal challenges she had faced, what she learned from them, and how we can pause, think and act to address our own difficulties. As a result, our audience asked thoughtful questions and we all learned some practical tips. Darcy’s presentation resonated deeply and it was one of the very best we’ve ever heard. I’m pleased to give Darcy my highest recommendation."