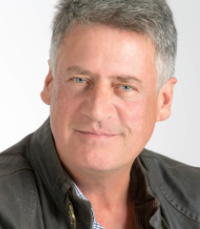 A Keynote Speaker, Conference Chair and MC for 8 years, speaking throughout Australia and at international conferences and events worldwide including the USA, the UK and Asia-Pac.

Jerry was the youngest pilot to ever be admitted to the Royal Navy‘s officer training school at 17 years of age, and by 25 YOA he had become the most decorated Search and Rescue helicopter pilot in peacetime. This is a record he holds to this day.

He was awarded the Air Force Cross (AFC) by HM The Queen for his rescues during the perilous conditions of the Fastnet Yacht Race, the Hellenic Medal of Honour First Class, as well as a Queen’s Commendation for valuable service in the air.

Jerry has flown  his helicopter for films and television programmes on every continent except the South Pole...  over Kuwait after the first Gulf war, over New Orleans 24 hours after Hurricane Katrina struck, from Victoria to West Australia including in the aftermath of Black Saturday’s horrendous bush fires, across Europe, Africa, the Middle and Far East and the British Isles.

Jerry has directed films shot at NASA’s Kennedy Space Centre in Florida and Mission Control in Houston and the European Space Agency’s Headquarters at Noordwijk Holland.

Jerry’s two books ‘RESCUE PILOT; Cheating the Sea’, and ‘FILM PILOT – FROM JAMES BOND TO HURRICANE KATRINA’ were published by Bloomsbury worldwide.  During publicity for both books he appeared on national television and radio worldwide.

The final chapter of FILM PILOT describes the disruption to the helicopter film world that drones have brought about, and poses the theory that the advent of drones and the innovations they bring is the most exciting thing to happen in aviation since the Wright brothers.

He has been chairing conferences and giving keynote presentations world-wide, using incidents from his aviation experiences to address the overall concept of risk management.

Jerry holds dual citizenship of the UK and Australia.

He can be booked for events worldwide including consultancy positions, expert witness report writing, and training events.

We engaged Jerry as Keynote Speaker for our annual risk management conference on the topic of “Embracing Change”. Jerry is a charismatic and engaging presenter who has the ability to relate his life experiences in telling a captivating story that still delivers a strong and powerful message. Feedback from the audience of around 200 members was extremely positive and I would warmly recommend Jerry to any organisation or event that wants to challenge and motivate their audience.

What sets Jerry apart from the numerous story tellers out there on the keynote speaking circuit is the fact that he works with his ‘client' beforehand to understand the audience and the message that the client is trying to convey. From there he draws on his vast experience, tailors his message impeccably.

Jerry was fantastic, he was the best first day speaker we have had over the last eight years. His presentation was highly interesting, motivational and captured the audiences’ attention from the beginning. He is a down-to-earth person with an amazing story to tell.