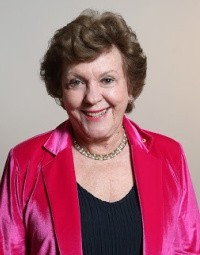 Sallyanne Atkinson became well-known when in 1985, as a young mother of five, she was elected the first female Lord Mayor of Brisbane, Australia’s largest local authority. She would then become known internationally when she led Brisbane’s bid for the 92 Olympics which involved presentations to various international Olympic functions.

Since City Hall she been a non-executive director on several major public companies, including Caltex, APN News and Media, and Abigroup, and has mentored and advised large and small businesses.

She has been Australia’s Senior Trade Commissioner to Paris, the Queensland Government’s Special Representative to South East Asia, and Chairman of Queensland Tourism. She was a member of the presentation teams for both the Melbourne and Sydney bids, and then a member of the organising committee for the Sydney 2000 Olympics and Deputy Mayor of the Athletes Village.

Her current activities include being Chairman of the Museum of Brisbane and of The Womens College at Queensland University. After being for some years the Chairman of the Commonwealth Advisory Committee on Dementia, she is a Board member of the Queensland Brain Institute at UQ, as well as of Queensland Leaders and the Waltzing Matilda Centre at Winton.

Sallyanne uses her rich life-experience to address a wide range of topics. They include leadership and management (and the difference between them), government relations, urban planning, positive ageing and dealing with change, international trade and business and working successfully in foreign cultures.

Having organised conferences and seminars, she is an experienced chairman and facilitator and a mediator in community consultations.

Her particular speaking interests are working through transitions and preparedness for the future.

A journalist by training, she regularly appears on television and radio panels and in the print media. Her memoir No Job For A Woman deals with growing up in Sri Lanka and on the Gold Coast.