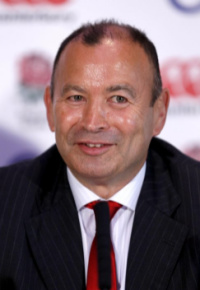 Eddie began his coaching career at Randwick Rugby Club before being recognised as coaching talent by the Japanese Rugby Union in 1996 and travelled to Japan.

At the conclusion of his international coaching duties, Jones took the position of Head Coach at the Suntory Organisation in the Japanese Company Championship. With success in Japan behind him, he accepted an offer to join the ACT Computer Associates Brumbies for the 1998 season, coaching them for 4 years, winning the Super 12 in 2001. He also coached the Australian Barbarians in 1999 and the Australian ‘A’ to a victory over the British Lions in 2001.

Eddie took over as National Coach of the Wallabies in July 2001 and guided the team to Bledisloe Cup and Tri Nations Series victories, and runner-up in the 2003 World Cup in Sydney.

In 2007 Eddie was appointed the technical advisor of the South African rugby union team, which went on to win the World Cup.  Having rejoined Suntory Songaliath Japan, he led Japan to their sixth and seventh consecutive championship win in the Asian Five Nations in 2013 and 2014. After the completing his duties at the helm of the Japan national rugby union team at the Rugby World Cup 2015, Eddie Jones joined The Stormers in Cape Town.  Eight days later he was signed as the first foreign head coach of England Rugby, replacing Stuart Lancaster and became one of the highest paid head coaches in world rugby.  He was signed for four years to take England to the 2019 Rugby World Cup.

In is book 'My Life and Rugby' he tells his story, including the full inside story of England’s 2019 World Cup campaign.