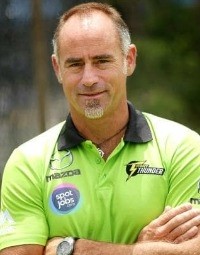 A decade-long search, which included two masters degrees, lead Paddy to eventually discover what he was looking for – modern-day best-practice in leading sports performance.

His early reward was to have the majority of sports administrators and coaches disregard his work, as they held onto more traditional methods.

Being told “that won’t work” served to motivate Paddy to the point where he is currently recognised as one of the most innovative coaches in the world.

Paddy claims he does all this to support his surfing, stand-up paddling and fishing habits.

Paddy’s workshop (Texas, USA) was rated an overall 94%. Delegates are still raving about it. I could not recommend a speaker or workshop facilitator more highly.

Paddy was able to bring the workshop to life in a practical and well-contextualised manner, enriched by his use of anecdotes. All participants rated the workshop very highly.

Paddy Upton’s presentation to the top 500 managers at ABFSG Day was a great success. It was wonderfully illuminating and was rated as relevant and valuable by 100% of the 500 delegates. Some said Paddy’s presentation changed their life.