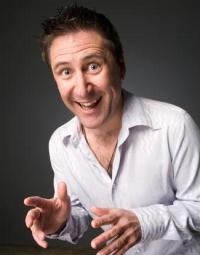 After spending time overseas travelling through countries such as India, Nepal and Thailand, Adam took the leap into Stand up Comedy in 1996. He quickly became one of Melbourne’s fastest rising stars, working as either MC or headline act in places such as ‘the Comedy Club’, ‘the Comics’ Lounge’ and ‘The Espy’ in St. Kilda within eighteen months.

In 1997, Adam began writing, directing and hosting ‘the Looney Bin Theatre Restaurant Show’ initially there as a singer, Adam would often write specific comedy routines, songs and parodies for corporate groups such as Toyota, Telstra and McDonalds.

In 1999 Adam was employed as a writer on the comedy sketch show ‘Full Frontal’. He also appeared regularly in the Channel 7 sketch show ‘The Big News’ and performed his stand up on ‘Foxtel Headliners’.

Adam has enjoyed many serious roles in Australian drama programs such as ‘Stingers’, ‘Neighbours’ and eight episodes of ‘Blue Heelers’. (He was at one stage suspected of killing Maggie Doyle!) On top of this, he is a well-known face from over a dozen television commercials.

Adam’s show for the Melbourne International Comedy Festival entitled ‘Footy, the Show’ played to packed houses and rave reviews. ‘Adam Palmer…Goin’Off!’ was Adam’s solo show for the Comedy Festival and was an hour long extravaganza of musical stand up comedy at ‘the Comic’s Lounge’.

Adam has performed Stand Up Comedy as Headline act or MC for, The Comedy Store (Sydney), Threadbo Ski Resort and The Continental (Foxtel Headliners). Musically, Adam has been engaged to write and perform for corporate cliental as well as creating educational and training video soundtracks.

Adam performs at social functions, corporate launches and various venues around Melbourne with musical partner Derek Lewis in the guitar duo ‘Grouse’. As an accomplished MC, Adam has worked with Steve (Bedders) Bedwell on his ‘MMM tour of the suburbs’ and has done regular radio Stand-Up comedy spots on Triple M, Fox FM, and Triple J.