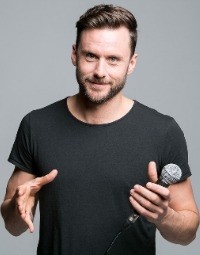 Dave Thornton has built a global reputation for his honest, engaging, whip-smart and damn funny comedy. He’s stormed the world’s three major comedy festivals, and back home Dave is a hot ticket across the country, filling thousands of seats with a growing army of fans.

Dave’s TV credentials include hosting Channel 9’s 20 to 1, appearances on Network Ten’s the Project and This Week Live, ABC TV’s Spicks and Specks and Agony Uncles. He’s even tried his hand at acting, appearing on Channel Nine’s House Husbands and ABC TV’s Upper Middle Bogan. Pretty much any gig where there’s catering, Dave will be there.

Dave spent four years co-hosting Fox FM’s breakfast radio show alongside his good friend Fifi Box which he decided to wrap up in 2017.

In 2018, Dave will be touring the country with a brand-new show, So What Now?

A quick and self deprecating wit ... an engaging comic with a truly Australian take on life.