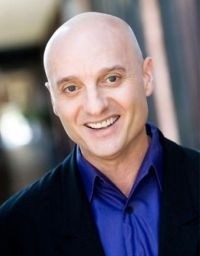 Bruno Lucia is one of Australia’s most popular comedians and TV personalities.

Known as the lovable sleaze in Channel 9’s smash sitcom, All Together Now, Wayne “Chicky Babe” Lovett is such a hit because Bruno plays the manipulative “manager to the starts” strictly for laughs.

Bruno has been performing successfully on the comedy circuit in Australia and America for many years. He has recently completed his second tour of the leading comedy clubs across the USA and Canada, and is a regular performer and compere at premier venues around Australia.

Brighten up the business with some fun!  Whether you want help to get your message across in product launches, training videos, advertising campaigns or Master of Ceremonies…or just be entertained, Bruno Lucia can add that essential ingredient – laughter.

As well as writing his own comedy, Bruno is also an accomplished musician and songwriter, having played on the professional rock circuit in his formative years in Australia for ten years, opening for the likes of, George Benson, Madness, The B52's, Joan Armatrading, Jose Feliciano, Midnight Oil, Cold Chisel & Crowded House.

As an Actor, Bruno has featured in many dramatic roles such as the Australian / US mini-series, A Ring of Scorpio, Stingers, A Country Practice and the Childrens TV series, Legacy Of The Silver Shadow. On the big screen he has appeared in the feature films, Sweet Talker alongside Bryan Brown & Karen Allen, Time Guardians with Tom Burlinson & Carrie Fisher and recently Loves Brother with Giovanni Ribisi & Adam Garcia.

On the Corporate Comedy scene Bruno has performed over 500 Corporate engagements. Whether it be as an MC or after dinner comedian, Bruno is an inoffensive, funny, reliable, laugh maker.

He is a polished presenter who is guaranteed to supply the laughs having had extensive experience with product launches, advertising campaigns, training videos and award nights.