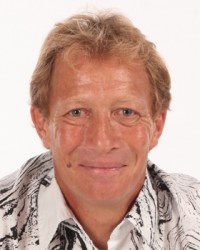 Steve Allison knows how to make people laugh, and as soon as Steve picks up the microphone, it's obvious. He commands attention, and laughter is the best way to get it. With a cool and casual approach, hundreds of thousands of people have enjoyed his clever style of comedy. The confidence and experience earned from performing over a thousand live shows is clear. He is funny!

With a natural sense of humour and quick wit, Steve's show is a well-crafted mix of snappy one-liners, hilarious stories, funny home truths and current topics. It's Aussie humour at its best.

Steve Allison is regarded by his industry peers as the best undiscovered comic in Australia. Over the years, Steve has travelled over a million kilometres on the comedy circuit honing his craft. His clever, laid back, friendly style of comedy has a polish and delivery that guarantees laughs.

Steve Allison was born into show business; his parents (The Allison's) were Australia's top sight act for over thirty years. His dad always said as long as you live under this roof, you will do things my way. So Steve had to come home from school every day drunk, and tell mum a joke.

Stand out performances in comedy clubs has led to countless corporate gigs, international tours and television appearances. Steve Allison is a genuine larrikin, with a love of life and fun and laughter.

I have not laughed so much in so long. What a funny man, he kept the audience going the entire time. Everybody thought he was sensational. GREAT JOB STEVE!

Your stand up comedy act was truly hilarious. It was all that everybody was talking about for days after. Thanks for making our Christmas party one of the best we've ever had. Cheers Mate!