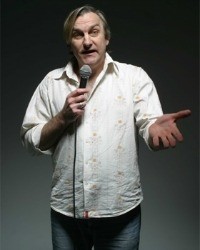 Andrew Nason is a talented and versatile comic writer, director & performer and is a headline act at comedy clubs in Australia and internationally.

Andrew propelled himself onto the Australian comedy scene in 1994. With a keen wit and incisive style, he remains one of the most popular comedians on the SE Qld Comedy Circuit, both as a headline act and Master of Ceremonies (MC).

A former high school teacher, Andrew felt the relative quiet of a comedy club audience would be a welcome change from the various classrooms where he had been performing.  He began his career as a support act to artists such as Steady Eddy, The Scared Weird Little Guys and Carl Barron. He performed as a headliner at the Melbourne International Comedy Festival and was booked to return with his own show in later years.

Andrew’s comic writing talents were recognised by the ABC TV as a writer for the satirical BackBerner program (which finished in 2003) and by SeaFM where he writes and performs a weekly radio spot.

Andrew also lectures in stand-up comedy at University. Andrew is versatile in roles such as a corporate impersonator, roving characters, Basil from Faulty Towers (no link to the BBC series) and Master of Ceremonies.

Andrew has worked as a highly professional emcee since 1994. In the role of emcee Andrew has introduced celebrities, CEO's and comedians, politicians, Premiere's and future Prime Ministers, speakers, sports-stars and survivors, musos, newsos and magicians. He has also opened conferences, conducted interviews, moderated debates, chaired meetings, delivered content, run workshops, performed role plays and, on one occasion, refereed a fight... (don't worry, it was staged). It is a testament to both his professionalism and his abilities that he is often offered return work.

A professional improviser as well as comedian, Andrew is able to combine these skills in his performances, therefore presenting a show that is fresh and constantly evolving and changing.