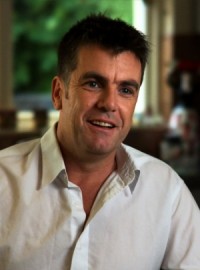 Whether it's appearing as a TV presenter, utilising his polished interviewing skills and humour as a corporate MC, or performing a hilarious 30 minute set of stand-up comedy, Des delivers a top notch comedy performance every time.

Des Dowling's first paying job after leaving school was as a rouse about in a shearing shed. It may sound quintessentially Australian but it was also very physical work, something Des was committed to avoiding wherever possible. A journalism cadetship on a regional daily newspaper seemed a far more civilised profession and was the stepping stone to stints with ABC TV in Hobart and Channels 9 and 7 in Melbourne. While working as a reporter in commercial current affairs Des decided making people laugh was a far better way to make a living than making them cry.

In late 1997 a lifelong itch was finally scratched when he made his stand-up comedy debut in dimly lit pub in inner Melbourne. In the years since he's criss-crossed the country firmly establishing himself on the top shelf of the Australian comedy scene there have been numerous TV and radio appearances, including a two year stint on commercial breakfast radio in Melbourne, and several years as an intrepid reporter on Channel 9's Talk To The Animals.

Other highlights include a Logie nomination for Channel 10 comedy series Mark Loves Sharon which he directed and co-wrote and sold out shows at the Melbourne International Comedy Festival.

I've been to a lot of functions throughout my time as President of the Banyule Amateur Football Club and quite frankly Des Dowling was absolutely magnificent last Saturday at the Bear Cave. The audience, from our u19 boys to some of our senior life members, were thoroughly entertained as Des let them rip in a very professional and polished performance. Excellent!

This year Des Dowling was our MC at Comedians for a Cause at Melbourne's Crown Casino to raise money for Open Family Australia. He not only had to entertain the 900 strong crowd and keep the night flowing he also more than held his own against a line-up of the best stand-up comedians in the country. We were very impressed.

The North Melbourne Football Club prides itself on engaging the best possible comedic talent for the many diverse events it holds each year. Des Dowling is one of those performers. As well as performing his stand-up routine to much acclaim Des has also worked closely with us to produce specific, and hilarious, comedy TV sketches for special Kangaroos events. With these value adding skills and his professionalism I would have no hesitation recommending Des to other event Managers.