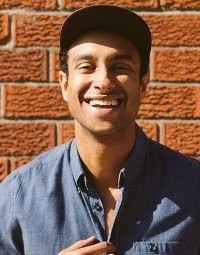 The multi talented comedian, actor and presenter Matt Okine is one of Australia’s favourite award winning comedians. Matt has scooped some major accolades in the past few years.  This includes an ARIA and the prestigious Director’s Choice Award at the 2015 Melbourne International Comedy Festival for his intrinsically personal show, The Other Guy. Following the success of this live stand-up show the popular TV channel Stan announced The Other Guy as one of the new original productions for 2017.

Matt performs sell out national tours of his live shows year in, year out, and has gained much popularity on the festival circuit with featured annual performances at the Australian and New Zealand Comedy Festivals, as well as appearing at JFL Montreal and Edinburgh Festival Fringe. He has toured in London, Singapore, Hong Kong & India, and has supported international acts including Dave Chappelle, Aziz Ansari and Chelsea Handler. Matt also makes appearances regularly in several TV shows including ABC TV’s It’s a Date and Dirty Laundry Live and SBS’s Legally Brown.

Matt spent three years co-hosting Triple J’s hugely successful Breakfast Show before hanging up his headphones to go into production on his television adaption of his award-winning semi-autobiographical stand up show The Other Guy for Stan. He co-wrote and starred in the show which aired in August 2017 and earned him an AACTA nomination for the Subscription TV Award for Best New Talent.

Matt consistently tours Australia and New Zealand, previous tours included his much loved 2018 solo show The Hat Game and continues to appear at various events and festivals around the world.

Leave with a song in your heart.

Bound to become one of Australia’s most popular stand-up stars.