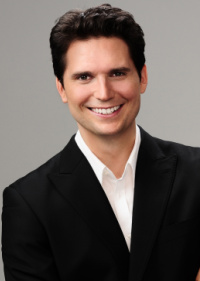 Considered one of Australia’s funniest and most exciting comedians, Joel Ozborn’s first real taste for comedy came when he won his high School public speaking competition. Rather than delivering a conventional speech on politics or the environment he chose to talk about the anxiety of Wombats, which left both students and teachers in stitches. Since then his comedy has taken him all over the world and on tour with popular comedians like Arj Barker and Akmal Saleh.

I fell a little bit in love with Joel Ozborn. This tall, nonchalant Eric Bana look-a-like was perfect… went down a treat in a packed house. People were rocking backwards and forwards, holding in their stomachs and letting out shouts of laughter.

Joel was great, very entertaining especially with a difficult to please guests. He definitely won over a tough crowd of older male dealers. He was great in engaging the audience and it was a definite value add that he went around the room and spoke to as many of the guests as he could. We would definitely recommend him and would absolutely use him for another event!

As you can imagine, a business awards ceremony can sometimes be a bit dry, however as host, Joel’s comedic wit, enthusiasm and fresh jokes meant our guests were in stitches all night long, while also staying focused on the proceedings of the evening. His ability to think quickly on his feet was tested, when an impromptu charity auction was sprung on us. In literally a minute Joel transformed from MC to auctioneer. His professionalism, adaptability and ability to work under pressure have been a blessing to us all, which has made working with Joel a delight to work with. I would highly recommend him to any organisation looking for a comedian MC to host a corporate event, and would not hesitate in booking Joel again to host one of our events.