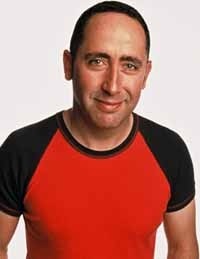 He is in strong demand as a one of Australia’s top television comedy writers and performers, and is one of the creative minds behind Network Ten's hit football show Before the Game.

He has also written for and appeared on Statesmen of Comedy (The Comedy Channel) hosted by Trevor Marmalade, Rove Live ( Network Ten ), Mick Molloy’s The Nation (Nine Network), The Jimeoin Show (Seven Network), Skithouse, The Russell Gilbert Show and adding to the list he is the 'Studs and Duds' expert on Supercoach (Fox Footy).

Paul co-wrote the biography of fictitious footy star Strauchanie - Bryan Strauchan- My Story, with Peter Helliar, and has contributed to several other humorous books.

Paul continues to be a regular on the stand up circuit. His material follows a reasonable logic to bizarre conclusions. Hilariously deadpan!

His insights on life are both witty and clever.