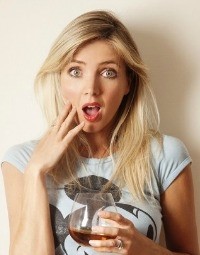 A born and bred Queenslander, Osborne grew up game fishing, go-karting and downing Dominos while watching the Broncos. Growing up in her model sister’s shadow, Nikki, the less attractive one, learned to grab the spotlight with Michael Jackson impersonations and fart jokes.

Bravely at 17 with a face full of braces auditioned for QUT’s prestigious acting academy. After auditioning against 2000 other hopefuls, Nikki’s dad was in shock when she secured one of the 15 spots on offer with her comedic rendition of Romeo and Juliet and said: “I thought it was funny that Juliet is arguing with herself on a balcony about a dude she’s crushing on hard”.

Being one of only 6 who graduated from the gruelling degree of acting, Nikki has continued working alongside Australia’s biggest comedic talents such as Mick Molloy, Steve Vizard, Ronny Chieng, Nick Cody and Troy Kinne.

Nikki’s comedic talents were made obvious when hosting the late night quiz show on Channel 9, Quizmania, where Nikki was often required to ad lib when the phones were down. Happening quite a lot allowed Osborne to practice comedic material on LIVE television and was often quoted in the papers the following day.

Not much has changed as her first stand up show “On The Spectrum” became the most controversial and talked about show of the Melbourne International Comedy Festival, attracting national and international press. Despite the subversive nature of the topic, Nikki was praised by audiences for her hilarious yet heartfelt content.

Despite having worked with Oscar-winning directors on award-winning series, Osborne says she’s happiest delivering her own material and is currently writing her own comedy TV series.