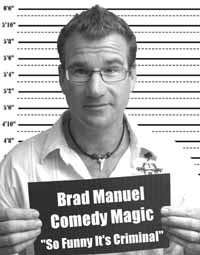 Brad Manuel has a repertoire of funny and entertaining tricks and he also has a full stand-up comedy magic show that will have your guests talking about you and your event for a long time.

Brad is one of the funniest and most creative entertainers you are likely to see, a world class comedian and magician rolled into one. Brad’s shows feature his original 'Mess With Your Head' magic, blended with a style of interactive comedy you have to see to believe, which together deliver a truly unique experience.

Brad's original roving entertainment blends his likable personality, humour and amazing skill to deliver a truly unique and enjoyable entertainment experience. Brad is a master in what many people call "Real Magic" - the performance of magic right in front of the audience so close they can touch and be part of the experience.

By mingling in with your guests, Brad offers you a comical and amazing form of personal entertainment that sees magic often happen in 'your own hands'. He possesses the ability to astound, amuse and just plain blow away anyone, anywhere, anytime.

Brad also has the unique skill of dice stacking and he holds the unofficial world record for this obscure feat of 25 dice. If you have not seen this before it is one of the most amazing things you will ever see - and of course with everything Brad does, he manages to make this funny too! As a magician, one of Brad's specialises in making that which is 'perceived' as impossible, possible. Brad also has a keynote presentation that demonstrates this theme, in an entertaining and highly motivating manner.

He uses his unique skillset to engage and inspire the audience by sharing some of his own personal challenges or 'speed bumps'. At the age of seventeen, Brad was in an accident, fortunately after the resulting surgeries he got his life back on track, he was forced to deal with and overcome many challenges, which in turn lead him towards a new career path.

At aged 17 Brad was injured in a workplace accident and he went blind instantly.  Surgery saved his eye, but he was blind for about three months during which time he started doing rehab and developing his magic skills.   In 2009 he was told he would only have 12 months to live, but his determination to exercise daily, and take control of his life has the medical doctors in awe of him and his progress.  Whilst his keynote has quite heavy content, he uses his comedy and magic to lightening the presentation.

Most recently he was diagnosed with a very rare debilitating neuromuscular and auto-immune disease that limits his ability to use his hands. The impact of this condition was so significant that at one stage he could not even do up his own shirt buttons, or even put his hands in his pockets.

Just imagine that while achieving and maintaining the very top level in his career performing 'sleight of hand' in over 20 countries all without the proper use of his fingers and hands... now that is Magic!

I was absolutely delighted with our selection of Brad Manuel - his performance was nothing short of exceptional. It was both truly mystifying and hysterical. I glanced over at our Executive Management and they were laughing so much they were nearly crying!

Sensational!...Brad had everyone in hysterics - Delegates, Sponsors and Clients alike no one was spared!

Brad is by far the best entertainer we have used. His ability to interact with all level of team members underlies his significant success. Excellent and so funny, great fun!

As a combination of entertainer and motivator, Brad Manuel is exceptional. Brad has presented his talents to our group of financial advisers on a number of occasions in several different ways. His magic act is amazing and hilarious and his keynote address is absolutely inspiring. Brad has the natural instinct for connection with his audience, as well an extraordinary life experience that lifts listeners out of their seats. He is one of the best.