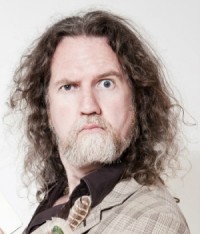 Dave Callan is the Irish born Melbourne based comic who is best known for his roles on Rove Live and Triple J.

Over the years he has popped up on Good News Week, Hey Hey its Saturday, Spicks and Specks, The Melbourne International Comedy Festival and Good Morning Australia with Bert Newton. Dave was part of the cast of Good Game from 2011 to 2016 and hosted Saturday nights on Triple J 2005 to 2010.

Dave performs corporate hosting and comedy in Australia, New Zealand and South East Asia and is a regular on the festival circuit. He has performed shows at the Melbourne International Comedy Festival, Adelaide Fringe, Perth Fringe world, Woodford Folk festival, Edinburgh Fringe and Montreal. Dave has hosted the touring Melbourne comedy festival roadshow since 2001 to places as exotic as Mumbai, Singapore, Kuala Lumpur, Penang and of course Rutherglen.

With over 20 years in the business, in front of every type of crowd imaginable, Dave Callan is a performer who can get the job done and take the night to a new level.