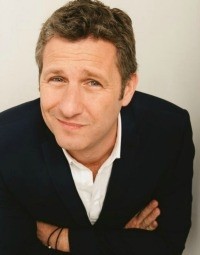 Spicks and Specks were ABC TVs highest rating program for seven years and the anchor for its highly successful Wednesday night comedy line up. In 2011, Spicks and Specks finished up on a high note after 7 years and 277 episodes. In 2012 Adam, Alan and Myf embarked on a huge national farewell tour of Spicks and Specktacular, performing to more than 80,000 fans around the country.

Already a gold-plated star in Australia, Adam Hills has now taken the UK by storm with his own talk show on Channel Four - The Last Leg. Originally a one-off series for the 2012 London Paralympics, the poms loved him so much it has been on air ever since.

When Adam isn’t dominating the global TV landscape, he is usually somewhere in the world with a mic in hand doing his day job - globetrotting stand-up comedian. Adam has conquered Edinburgh and featured in more Montreal festivals than any other Australian. In 2015 his global tour Clown Heart debuted with a sell-out season at the Melbourne International Comedy Festival and continue to pack houses at the Sydney Opera House, Montreal Just For Laughs Festival, Edinburgh Fringe Festival. The tour ended in London at the Leicester Square Theatre in 2017, filmed for DVD and due for release with Universal in November.

Amongst this he's won a prestigious Helpmann Award, A British Comedy Award, been nominated for a BAFTA for Best Entertainment Performance, released three best-selling stand up DVDs, had his own one hour stand up special on ABC TV and UK’s Channel 4 and performed for the Queen.